Paris. A romantic city of grand boulevards, of tree-lined plazas filled with cafés and bistros. A city of beauty, a city of love, a city of light. The grand 19th century buildings shining with glamour, gorgeous cathedrals gazing down on you. But aside from this, there is another Paris. A poorer one, more everyday. There are highways, jammed with pollution-spewing cars. One that is not the Paris that tourists know. One that isn’t the image of a picture-perfect city. This is the Paris that overwhelmingly supported Marine le Pen in the elections, one that feels forgotten.

Paris’ city limits haven’t changed since the 19th century. The old wall was torn down and replaced by a 35-km highway ring road that acts as a divider between central Paris, or Paris proper, home to 2 million people, and the suburbs and the greater region, which contains more than 10 million people.

Recently, the mayor’s office has started waging a war on cars in the inner city, closing down a highway on the banks of the seine, with intentions to replace it with a pedestrian promenade, and announcing an ambitious new plan to cut the citywide speed limit to 30-km/h instead of 50.

This might be a step in the right direction, but it fails to address the root of the problem. Suburbanites are more car dependent, and as the highway served as a thoroughfare, the Mayor’s plan risks infuriating them and further dividing the metropolis. Most people polled about the closure had a negative opinion about it. However, there is little they can do about it, as the Mayor is elected by Parisians living within the ring, who are more likely to use transit, walk, or bike.

Why is the Mayor taking all these steps in the first place, you might ask. The answer is that Paris has a pollution problem. Recently, toxic smogs have been descending upon the city for the past year. The goal is to decrease this pollution, ultimately. But to solve that, the suburbs and the inner city need to be stitched back together, and a united transit network needs to be formed. Only a few Metro lines extend into the suburbs today. Often, the only way to get in the city is to drive. 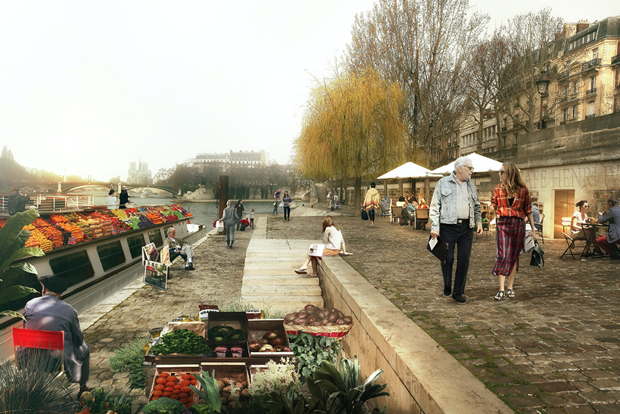 Don’t worry, there is a plan for that too. Appropriately named the Grand Paris express, two Metro lines will be extended farther into the suburbs, while four new lines will be constructed, opening up a whole new part of the city to transit. The price tag on this mammoth plan is expected to be about 30 billion euros, to be completed by 2030. However, unlike with the quayside closings, to realize it, the city needs to work with the areas beyond and their politicians.

But even if this comes true, what about the ring road? While it divides the inner city from the suburbs, everyone, regardless of where they live and where they place themselves on the political spectrum agrees on one thing. There is a problem, and something needs to be changed. In fact, every political part has come up with their own idea of how to reunite the metropolis. In a statement from the Republicans, a main center-right party, they suggest that the highway should be covered up, freeing up extra space. However, as much of the highway runs at ground level, or above, it would certainly cost quite a fortune to do. Meanwhile, the Green party endorsed transforming it into a green, urban boulevard.

Will all these ambitious plans, taken together, succeed? Or will they further cause more fragmentation and controversy in an already divided metropolis? We’ll have to see.

One thought on “Can Paris succeed in reuniting itself?”

Welcome to Marble Mosaic. On this blog, you will find pretty much anything interesting.

Like what we do here? Want to see even more interesting articles? Feel free to follow us online or on social media! If not, please give us feedback of what you would like to see more of here on the blog.